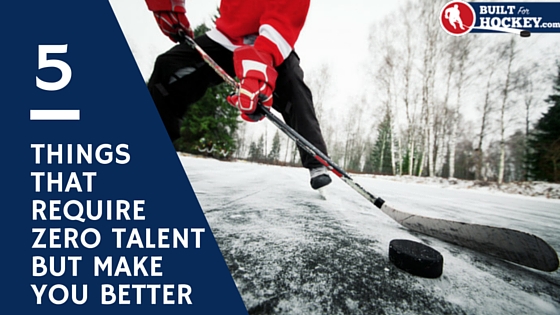 If you’re like me and spend a lot of time on the internet, chances are you’ve seen the post I’m referring to.

Now, I don’t know who the original creator is or when it was first published,  but there’s one thing I DO know for sure…

The 5 things mentioned in this post are the perfect recipe for setting yourself up for success in life, and also in hockey.

Now don’t get me wrong…

Talent is extremely important in hockey, but there are a few ‘non-talent’ related things you can do to amplify the rate at which you develop as a hockey player.

These things have nothing to do with how good you are, and EVERYTHING to do with your character.

In my post, I take the 5 most important things from the original post and tie them directly to the game of hockey, giving you 5 things you can work on to improve your game that have nothing to do with talent.

5 ‘Non-talent’ related things to help you improve your game

If you’re a player, add these 5 things to your game and you’ll see an improvement in your performance over time.

If you’re a coach, build these 5 traits into the overall DNA of your team, and you’ll take your player development to the next level.

A simple thing that is entirely in your control is punctuality. Being on time is a choice, and it can have a profound impact on your performance.

When you’re running late, your mind has to “catch up” so to speak. You’re 100% focused on making it on time.

Your mind is in the wrong place.

It’s extremely tough to then turn your focus towards things that matter, like practices, team workouts, and games.

If you’re late for practice, your first few drills will suffer because you haven’t had the necessary time to calm your mind and get ready to improve. Over an entire season, that can have a big impact on your development.

If you’re rushing to get ready before a game, your first few shifts will suffer because your mind is still racing and won’t be calm enough to help you make the right decisions. Just one mistake can mean a goal for the opposing team.

As I’m sure you know, it takes a ton of mental toughness to get back on track once you’re off to a bad start—save yourself the trouble by being on time.

That’s not all. Being on time has a ton of other benefits:

The takeaway: Just be on time. It’s completely under your control, and can make a big difference in your overall performance.

I like to think of work ethic as a performance multiplier. It can take someone with average skill & average hockey sense and make then above-average.

It’s also the same thing that can take a player with above-average skill & above-average hockey sense and make them below-average.

Only you decide if your level of work ethic works FOR you or AGAINST you.

I’ll leave you with this quote by Thomas Jefferson:

“It seems the harder I work, the luckier I get.” – Thomas Jefferson

Go out and create your own luck.

I’ve already written about this topic and how it can improve your on-ice performance, so I won’t repeat myself.

Check out my article on body language in hockey if you want to learn more about how changing just a few things in your game can really help your performance in the long-run—no talent necessary.

Energy & enthusiasm is so important when it comes to developing as a hockey player. When you play competitively, you can find yourself skating anywhere from 5 to 7+ times per week.

Sometimes, it’s hard to find the energy & enthusiasm needed to improve—but it’s a must if you want to get better!

In Junior, we used to practice early in the morning every single day…

My old coach knew that some of the guys just weren’t morning people, so he made it a point to be extremely lively and enthusiastic.

He even had this quote that he would throw out every morning until it became engraved in our minds:

“Nothing great has ever been accomplished without enthusiasm.”  – Ralph Waldo Emerson

He reminded us that to win it all, we had to be enthusiastic, energized, and ready to take advantage of every practice opportunity we had—even if we just strolled out of bed less than an hour ago.

Any practice we dragged our feet to was another practice in favor of our opponents.

It sounds weird, but it worked. Being enthusiastic & energized just became part of our team’s DNA.

We would get to the rink earlier, throw on some loud music and get ready to improve.

All this before 7AM, knowing that we were about to get our butts kicked all over the ice for the next hour or so (Mondays were the toughest!).

Think about that for a second.

We knew we were about to have the toughest practice of the week, yet our new-found enthusiasm made it such that we were EXCITED to get out and practice. We adopted a ‘win the day mindset‘.

As a result, we practiced at an exceptional pace, maintained complete focus for the entire duration, and had a ton of fun because we were enthusiastic.

It didn’t happen over night, but we slowly bought into our coach’s idea of enthusiasm & energy at all costs.

Come playoff time, we were well prepared because we had practiced better than any other team in the league.

Enthusiasm is your friend. Even if it feels like you’re faking it sometimes—your mind can’t tell the difference.

How do you deal with adversity?

Do you shy away and shut down, or do you challenge it head on?

When you’re down a few goals, do you pack it in our work twice as hard to get back in the game?

When practice is tough, do you hide behind the line to catch your breath, or do you push your limits in order to improve as a player, even if you’re dead tired?

What you do in tough situations depends entirely on your attitude.

Your attitude drives your behavior.

This quote by Zig Ziglar sums it up perfectly:

If you’re a negative thinker, it may be holding you back from success in hockey.

For example, what should you do if you suddenly start getting less ice-time?

The answer, of course, depends on your attitude.

A player with a negative attitude will blame his coach, linemates, or essentially anything that’s out of his control.

On the other hand, a player with a positive attitude will find a way to earn back his ice-time. He takes full responsibility rather than blaming others or pointing fingers.

Your attitude, above all else, is what drives you.

The next time you’re faced with something difficult, realize that it’s also an opportunity for you to grow as a hockey player and as an individual, and not just something that’s out of your control.

If there’s one thing I want you to retain from all this is that you have the choice.

With all 5 of these things, the choice is entirely yours to make.

Being on time is a choice.

Working hard is a choice.

Good body language is a choice.

Being enthusiastic is a choice.

Having a positive attitude is a choice.

Choose to add these 5 things to your game, and you WILL see improvements across the board in the long run.

Because they foster the perfect environment for proper learning & development to take place.

8 Comments on “5 Things That Are Guaranteed to Make You a Better Hockey Player (Hint: They Have Nothing to Do with Talent)”