The 2-on-1 is one of the most electrifying plays in hockey.

It can turn the tables in any hockey game if properly executed, and—aside from a breakaway—is arguably the most favorable situation for adding another goal to the scoreboard for your team.

But don’t be fooled…

The 2-on-1 play in hockey isn’t always the holy grail of scoring chances that people make it out to be.

And that’s because it’s extremely hard to be effective on the 2-on-1 as the attacking team.

Heck, it happens so many times—no matter what league you look at—where the attacking forwards end up taking a low quality shot or even none at all.

Sound familiar? The good news is it doesn’t have to be like that.

In fact, the one simple trick I’m going to share with you in this article should help improve your success rate significantly on the 2-on-1. Now, I don’t mean you’ll start scoring a ton of goals because that’s out of my control…

But if you use this trick, you WILL get more quality scoring chances on your 2-on-1’s rather than a bunch of wasted opportunities.

If you’re a player that struggles on the 2-on-1 or a coach that needs advice for your team, this blog post has got you covered.

By the end, you’ll know exactly how to approach a 2-on-1 for the highest chance of success.

The typical 2-on-1 problem in hockey 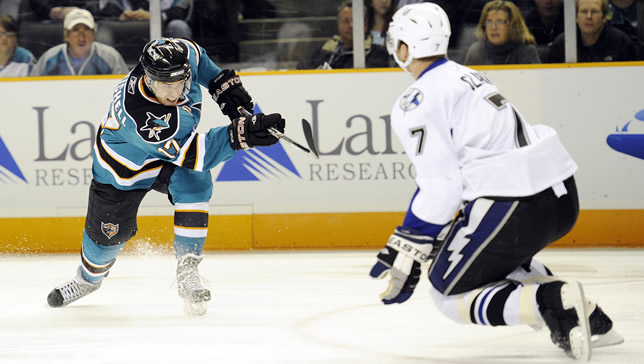 Before I start, I just want to mention that there’s no right or wrong way to approach a 2-on-1. If you’re highly skilled, you can do just about anything and turn it into a scoring chance.

What I’m going to show you here is just one of the techniques you can use to put the odds in your favor.

Use it or not…that’s up to you.

Now that that’s out of the way, let’s look at why most 2-on-1 attempts just plain FAIL.

On the 2-on-1, when the puck carrier decides to carry the puck in and wait until the last possible second to either pass or make a play, I just want to pull my hair out.

The worst part is, it isn’t the players’ fault…

With all the 2-on-1 highlights from the NHL, it’s almost like non-NHLers are conditioned to try for the “pretty play” because that’s what they see on TV.

They force the pass when they shouldn’t…

They go for the top corner when they shouldn’t…

All because they want that “pretty play“.

You have to realize that the more you wait, the longer the opposing D-man and goalie have to react and prepare.

All it takes is an extra second to position themselves appropriately and it could mean the difference between a goal and a save. DON’T give them that luxury!

If that weren’t enough, the longer you wait, the more you lose out on shooting opportunities.

Every extra inch you wait once you’re past the top of the circle reduces your available shooting angle.

Before you know it, you’re in too close to the net or maybe even off to the side where even my 5 year old cousin could make a save (I don’t have a 5 year old cousin, but if I did, he would probably save it).

Playing the waiting game on a 2-on-1 leads to turnovers, low percentage shots, and potentially even no scoring chance at all.

Aside from all that, a missed opportunity on a 2-on-1 can lead to a big momentum shift in the wrong direction.

So unless you’re Sidney Crosby, stay away from the waiting game as much as possible, got it?

The secret to an effective 2-on-1 in hockey

By passing early (after the blue line and before the top-circle), you’re forcing the D-Man and goalie to move.

You’re DICTATING the play, and they’re REACTING. See the difference?

Before—with the “waiting game”—all the defenseman had to do was sit back and wait until you slowly but surely eliminated all your available options.

Instead, make the early pass and force them to react to what you’re doing.

Now, the D-Man has to move. This can open passing seams & skating lanes that simply weren’t there before. Heck, the D-Man can even fall from re-positioning himself thanks to your early pass—this would never happen with the waiting game.

The same goes for the goalie—he has to respect your early pass and move. This can create openings due to bad positioning and angle coverage on his part after shifting his position.

These things play heavily in your favor, and all it takes is an early pass to take the defenders out of their comfort zone.

After your early pass, then you can explore different options like:

It’ll be that much easier to execute the above options once you’ve dictated the play and forced your defenders to react to you and not the other way around.

Here’s a great example of an early pass in action (in fact, this pass is even a little late—you can make the pass earlier).

I want you to watch the video below 3 times:

The first time, focus on the early pass from the forwards. Watch how the first pass is made before the top of the face-off circle.

The second time, focus on the D-Man. Notice how he hesitates and struggles to re-position due to the early pass. He’s not sure if he should fully commit, slide, or play passively.

And the third time, focus on the goalie. Watch how Schneider over-commits on the early pass, creating a huge scoring opportunity. The forwards made no mistake.

See how the defenseman and goalie have to shift, and as a result, get caught out of position?

Sure, the tic-tac-toe finish is nice, but it’s the early pass that catches the defenders off guard.

By making the early pass, you create confusion.

And that confusion can make all the difference.

On a 2-on-1, every inch you move towards the net reduces your available options and limits your shooting angles—don’t play the waiting game unless you have significant experience and success in these situations.

To put the odds in your favor when attacking on a 2-on-1, make the early pass to your teammate.

This way, you force your opponents to react and shift their positioning which can open up a ton of options.

After the early pass, it’ll be much easier to create a high-percentage scoring chance thanks to the openings you’ve just created for yourself.

It really is that simple—jusy one early pass can make all the difference.

Give it a try your next time out on the ice!

Have any questions about attacking on offense? Leave a comment below because I’d love to hear what you’re struggling with.