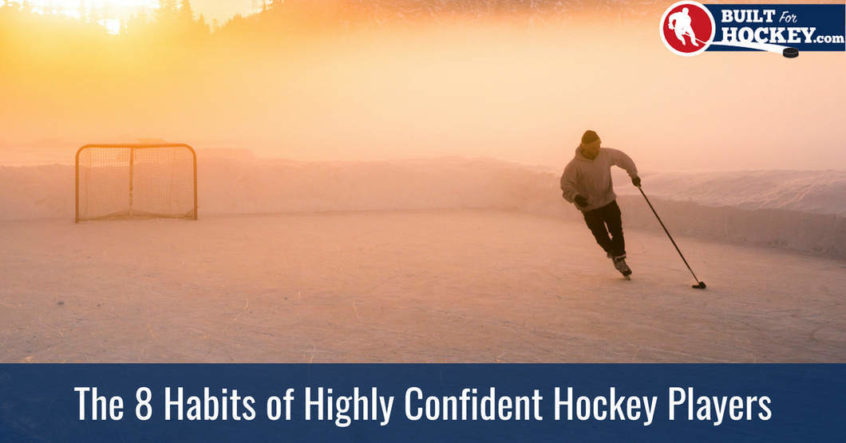 As a hockey player, you can have all the skill in the world, but if you’re not confident in your abilities, you won’t get very far.

Dr. Jim Taylor, an internationally recognized authority on the psychology of sport, even goes as far as saying that “confidence is the single most important mental factor in sports.”

“Confidence is the single most important mental factor in sports.” – Dr. JimTaylor

And while confidence is very much a skill that can be learned (contrary to popular belief), it’s still hard knowing where to start.

Well, I’m here to help you out with that…

Throughout my career, I’ve had the opportunity to play with and against many gifted, confident hockey players.

The kind of players that want the puck when the game is on the line, that step up and play clutch when it counts, and make things happen no matter what the situation is.

The list you’re about to read is made up of 8 common habits these players had, either knowingly or unknowingly, in some way shape or form, that led to them having full confidence in their abilities.

1. They own where they’re at

Confident hockey players own where they’re at.

If they’re playing well, it’s because of them.

If they’re playing poorly, it’s no one’s fault but their own.

They don’t blame coaches or teammates or outside factors. They take full responsibility for their play, and they own up to it—the good, the bad, and the ugly.

Owning where you’re at is crucial if you want to build longlasting confidence because it’s the only way you’ll put the work in when things go bad.

Players that take the easy way out by blaming others for their mistakes and bad performances tend to stay in slumps longer, which eventually takes a toll on their confidence.

Own where you’re at, take full responsibility for your performance, and your confidence will grow.

A confident hockey player not only know’s where he’s at (as mentioned above), but he also knows where he’s headed.

To build and maintain confidence, you have to improve each and every day. The only way to know if you’re improving for sure is to have a plan, work that plan, and check in regularly to make sure you’re making progress.

For example, the confident players I’ve played with always had a few areas of their game they wanted to improve—one-timers, face-offs, skating faster, etc.

They would always dedicate time after practice to work on these skills and improve them, building confidence in their abilities each and every hour they spent on the ice.

If you want to be more confident, adopt a growth mindset—create a plan, work that plan, and evaluate your progress each and every week (Sunday nights before bed are great for this).

Did you get worse, stay the same, or get better this past week?

Only one of those answers leads to an increase in confidence. Make sure you’ve planned and done what’s necessary so that you can answer correctly.

3. They act as if they’re there already

In other words, if you aspire to be a great stick-handler, a sniper, or a shutdown defenseman, you have to believe it with every fiber of your being before it’s even true—and it will eventually come to be.

Fake it til’ you make it.

What the mind can conceive and believe, you can achieve.

If you believe it or not, that’s up to you. But the truth is the mind can’t tell the difference between reality and fiction.

That’s why visualization is a hockey player’s best friend.

Act confident even if you aren’t, and you’ll begin to trick your mind into thinking you are—and then you’ll be!

Act confident even if you aren’t, and you’ll begin to trick your mind into thinking you are!

Give it a shot. What do you have to lose?

No matter how confident they become, highly-confident hockey players always respect those around them and listen to their constructive criticism.

Every ounce of feedback—no matter how big or small—is a chance to grow and improve.

Your coaching staff, your parents, your teammates—they may not always be right, but if they share feedback with you, it’s worth your while to listen.

If several people notice a part of your game that needs work, chances are it does.

(NOTE: Want to stop making mistakes with the puck and finally take control of the game? Grab a copy of The Hockey Sense Handbook and take your Hockey Sense to the next level.)

That said, being confident does NOT mean being cocky. Be humble and accept criticism, no matter who it comes from.

You never know who will give you a piece of advice that can make a significant impact on your game (this literally happened to me—read about it here).

5. They prepare as best they can

From putting in work in the gym and on the ice to working on your hockey sense and improving your mental game, the more you prepare, the more you’ll feel ready to perform.

If you’ve done everything you can to prepare for the struggles and challenges ahead, you’ll be much more confident in any given situation.

6. They aren’t afraid of failure

To the contrary, they actually embrace mistakes.

They know that mistakes are the key to growth, and they’re okay sacrificing short-term success for long-term growth.

If you think about it, the only way you can make the right play is if you’ve made the wrong play in the same situation at some point before.

In other words, you must fail in order to succeed.

Failure is a stepping stone to greatness.

In life, failure is just a stepping stone to greatness.

Once you realize that—and realize that failure isn’t the enemy everyone makes it out to be—you’ll get rid of the added stress that’s stopping you from playing your best.

Nothing sums this point up better than Michael Jordan’s relationship with failure:

You must fail in order to succeed. – image source

If you want to become a confident hockey player, your attitude towards failure has to change.

7. They do it for themselves

They don’t do it for their parents, their friends, or their coaches.

They work hard and push their limits for themselves because at the end of the day, real confidence is built within—not from the praise or approval they get from others.

It’s nice when someone gives you a pat on the back for a job well done, but if you come to rely on that positive feedback to boost your confidence…

…what will you do when it’s gone?

Believe me—you won’t always have people around to pick you up and boost your confidence, especially when things go bad.

At higher levels, positive feedback is even harder to come by.

You have to learn to build your confidence from within, and it all starts with playing the game for YOU and no one else.

Then, whenever you find your confidence is low, kick your work ethic up a few notches so that you can praise yourself afterward.

Rinse & repeat until you’re back where you want to be.

No need to rely on others for approval—you’ve got your own back, and that’s the ultimate form of self-confidence!

Last but not least, confident hockey players find a way to win the day, every day, no matter how bad things go.

That means even if they’re having a terrible practice, they find a way to get just a little bit better at one thing.

That means even if they’re injured and can’t get on the ice, they spend a few minutes visualizing their breakouts so they’re more comfortable with all the possible scenarios.

That means even if they’re a healthy scratch, they hit the gym to improve their skating speed.

No matter what, they find a way to improve every day, even if it’s just a 1% increase over yesterday.

Confident hockey players find a way to win the day every day…even if it’s just a 1% improvement.

That 1% compounds over time and they know that the more ‘days won’ they can string together, the more confident they’ll be across the board.

Do what you need to do to win the day. It’s that simple.

If you want to be a more confident hockey player that believes in himself, shines in big moments, and isn’t afraid to take calculated risks, then start by working these 8 habits into your game.

You may already be doing some of them and that’s fine.

But the more of these 8 habits you can squeeze in, the more your confidence will start to grow, and the more you’ll start to play like you’ve always known you were capable of.

And that’s exactly what you deserve!

Did I miss any confidence habits? Leave a comment below and let me know because I’d love to hear your thoughts on what it takes to be a more confident hockey player!

4 Comments on “The 8 Habits of Highly Confident Hockey Players”