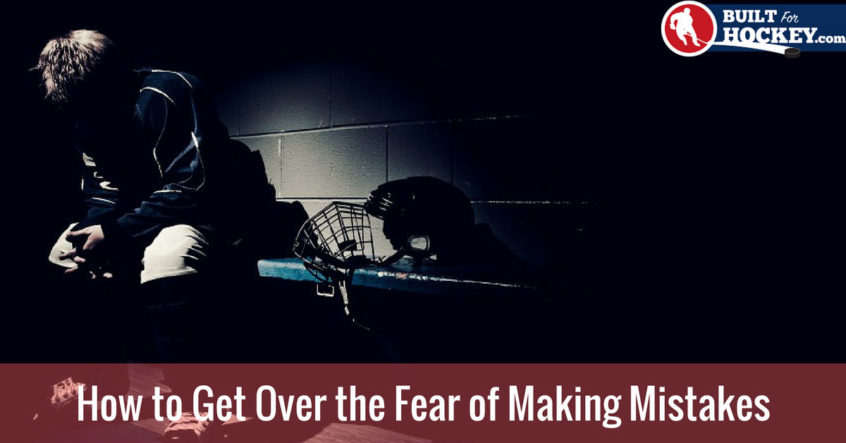 Last Friday around midnight, I got an email from someone (let’s call him Joe) that went a little something like this:

“Ben, I’m scared of making mistakes in hockey. I’m scared to mess up and lose the puck or cause a goal against. How do I get over my fear of failure? I feel like I’m not playing up to my potential!”

Joe’s fear of making mistakes was literally keeping him up at night.

I started writing up a long email to put him at ease and give him some pointers on how to get over his fear of making mistakes, but then it struck me that he probably wasn’t the only one.

I scrapped the email, opened up a word document, started typing furiously, and this blog post is what came out.

If you’re like Joe and have struggled with the fear of failure (ie: being scared to make mistakes on the ice) in the past, or if it’s something you’re going through right now, then keep on reading.

In this post, I’m going to walk you through 3 important realizations that will completely change the way you think about the game of hockey and help you overcome your fear of making mistakes.

They’re the same realizations that helped me get over my fear of making mistakes back in my early teens, and as simple as they are, the newly found confidence and poise they led to allowed me to totally revamp my game for the better.

In fact, if you sit down with a sports psychologist to talk about your fear of failure in hockey (a luxury not everyone has), odds are they’ll walk you through something similar to what you’re about to learn in this blog post.

By the end, you’ll know how to tackle your fear of failure in hockey and learn to play with more confidence.

Realization #1: The spotlight is not on you.

Most of the time, hockey players are afraid to fail because of what other people (teammates, coaches, parents) might think.

As a result, they play it safe, keep it simple, and give the puck away as soon as possible—even when unnecessary.

They play as if all the attention is on them, as if they’re in the spotlight or under the microscope. They play like their every move is analyzed and scrutinized by their peers.

There aren’t as many people paying attention to you as you think!

As humans, we greatly overestimate the rate at which other people notice us and the things we do. This is called the spotlight effect:

“The spotlight effect is the phenomenon in which people tend to believe they are being noticed more than they really are. Being that one is constantly in the center of one’s own world, an accurate evaluation of how much one is noticed by others is uncommon.”

This is the first important thing you have to realize in order to get over your fear of making mistakes in hockey. There are 12 people on the ice at any given time, aside from referees. The play changes directions every second. The lines change every minute. There’s a speeding puck. There’s noise. There’s music. There’s clapping. There are SO many things going on that people aren’t paying attention to you as much as you think they are.

A small mistake you made at 12:07 in the first period likely went unnoticed and will not matter tomorrow. In a 30+ game season, that small mistake is even more meaningless.

The Takeaway:
You’re not special. There’s no spotlight on you. Don’t be scared to make mistakes because of what other people might think; they’re likely not paying attention. And if they are, they’ll forget all about it before your next shift.

Realization #2: The worst that could happen isn’t all that bad.

If your fear of failure isn’t brought on by what people will think of you after a mistake, then it’s likely due to fear of what will happen if you make a mistake.

In other words, you’re scared of the unknown consequences of making a mistake:

The fact that you don’t know what’s going to happen if you make a mistake is what scares you.

Luckily, there’s an easy way around that: walk through all the possible scenarios in your head of what could happen if you were to make a bad mistake in your next game.

Chances are you only came up with a few different scenarios, and I bet none of them were even remotely close to life-threatening.

In fact, the consequences I mentioned above—getting benched or healthy-scratched—are probably the worst things that could happen to you.

There is absolutely NO need to fear making mistakes as a hockey player. Let me tell you why:

If that third one doesn’t hit home, then I don’t know what will. Read it again if you have to.

As a hockey player, you’ve got more to lose by “just playing it safe” than you do by trying to make the right play, even if you risk making a mistake.

The Takeaway:
If you’re the type of player that plays it safe and never tries new things for fear of making mistakes, you’re drastically limiting your potential as a hockey player. Don’t let this be you. Run through all the unknown consequences of making a mistake and you’ll have nothing left to fear.

Then, you can start taking control of your game and making things happen on your own terms.

Realization #3: The only way to fail less is to fail more

Last but certainly not least, the only way to fail less, is to fail more!

Why do clutch players seem to always make the right play at the right time, even under a tremendous amount of pressure?

The famous quote from Michael Jordan—which I’m sure you’ve seen or heard already—is both powerful and accurate:

Michael Jordan failed more than any other basketball player of his time, which is why he ended up having unrivaled success.

You can replace basketball with hockey, soccer, chess, business—the situation doesn’t matter. The only way you can be prepared for tough situations is to have been through them before and failed.

Want to know why veterans play such a huge role in winning teams, even though they’re typically older, slower, and not as conditioned as the younger superstars?

They have experience. They know what it takes to win big games because they’ve lost a ton of big games, and they show the way to the rest of the team.

It’s the same for you. The only way you’ll make the right play the next time around, is if you learn from your mistakes the first time.

The takeaway:
Switch your thought process from “mistakes are bad for my game” to “mistakes aren’t fun, but they help me grow into the player I want to be, and I’m okay with that.” Just this simple mindset hack will help you see failure in a whole new light, and it’ll help you turn one of your liabilities (ie: the fear of failure) into one of your greatest assets. Fail forward and get that experience under your belt!

So there you have it…3 things you need to realize in order to get over your fear of making mistakes as a hockey player.

First, there’s no spotlight on you. As humans, we tend to believe we’re special and that others watch our every move. Now you know that’s just not the case. Your mistakes likely go unnoticed for the most part, and the ones that do get noticed get forgotten pretty quickly. In other words, play like nobody is watching because they aren’t.

Second, if you’re scared of what might happen to you after you make a mistake, you need to figure out what that is. Figure out what’s the worst that can happen to you in order to put your mind at ease. Once there are no more unknowns, you’ll be much more comfortable with failure, and it won’t be some big scary monster that forces you to play safe. You’ve got more to lose by playing safe than by making mistakes anyway.

And third, failing leads to experience. The more you fail, the more you learn. You cannot be at the top of your game—regardless of what level you play—if you haven’t failed a ton. Learn to embrace failure and use the lessons you learn along the way to grow into the best player you can be.

Lastly, always remember that failure is required in order to grow. If you’re too comfortable, you’re not getting better.

If you’re not failing in hockey, it means you’re too comfortable—and comfort kills progress.

Is the fear of making mistakes something you or your players struggle with on the ice? Leave a comment below because I’d love to hear how you’re dealing with it!