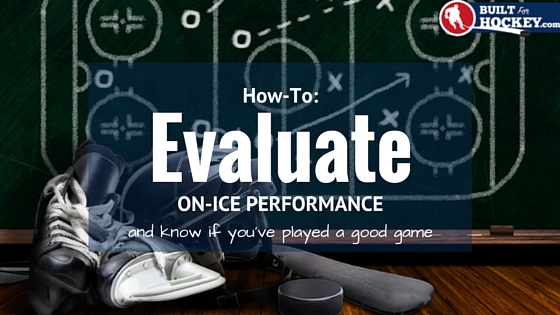 You just finished up your hockey game and are on your way home when you get a text from your friend.

It went well, you tell him. Your team won!

This one’s a little harder to answer…

If you’re like most players, you’ll answer “I got a goal” or “I got an assist.“

Is ‘not getting on the score-sheet‘ considered a bad game?

And unfortunately, too many players gauge their individual performance on results (like goals, points, saves, etc.), when in reality they need to be evaluating their performance at a much deeper level!

If you’re fed up with inconsistency, mediocre performances and just not knowing if you’re improving as a hockey player, then you’ll find this 3 step framework I’m about to share with you extremely helpful.

It’s short, to the point, and doesn’t take more than 5 minutes to implement. All you have to do is follow the instructions I lay out in this blog post and you’ll have a much better idea of your performance—as well as progression—as a hockey player.

If you’re a hockey player looking to get better, start following this framework for immediate results.

If you’re a coach, teach this simple framework to your kids and get them to evaluate their own performances based on how they played (the process) rather than the outcome (the results).

A quick lesson on progress

The definition of progress is:

“Forward or onward movement to a destination.”

Yet so many people have trouble when it comes to monitoring progress.

That’s usually due to one of two things:

Individual performance in #hockey should never be based on results. They’re half the story.

But what about the second statement…

This one is the key!

In fact, it’s the underlying concept of the 3-step framework for evaluating your performance and fostering continuous progression & improvement as a hockey player.

Now, I won’t leave you hanging…

Here’s how to actually implement it yourself to start improving your game.

The 3-step framework for continuous improvement

Before we start, I want you to understand that this isn’t some novel idea…

Business consultants, mentors and life coaches have been using this simple framework for decades to help their clients succeed—many of them make a very good living doing so.

Because many business owners & entrepreneurs put their head down and work until their eyes bleed, without paying much attention to anything else.

The ‘wise consultant‘ simply comes in and offers help by forcing them to take a step back and analyze where they’re at, where they want to be, and what it’ll take to get there.

Hockey players are just as guilty…

As hockey players, we too tend to put our head down and work hard. We focus on things like our skating speed, our hockey sense and our overall abilities, without thinking of much else.

What we rarely do is assess our progression—where we’re at, where we want to be, and what it’ll take to get there.

That’s the key to continuous progression.

Serious #hockey players act like business consultants when it comes to improving skills.

But how do we leverage this concept?

Be your own consultant and ask yourself the following 3 questions after each game in order to properly evaluate your performance and ensure you’re constantly getting better:

After every game, instead of looking at the score sheet to see if the referee gave you that assist on the 2nd goal, ask yourself what you did well.

Forget statistics. What did you do well?

Think of the question on a mental, technical, physical and tactical level.

Really ask yourself these kinds of questions. Keep a log book or journal if you have to.

In fact, I did this for most of my career and it helped me tremendously.

Over time and after evaluating a few of your performances, you’ll have a good grasp on what you’re good at.

Now it’s time for the bad.

What are you struggling with time and time again? What facet of your game needs to get better in order for you to grow as a hockey player?

Again, consider the 4 criteria I mentioned above:

You’ll see that over a few games, many of the same things will pop up over and over again—these are red flags that need fixing.

Once you’re done, it’s onto the last step of the framework…

3. What do I need to do in order to become my best?

This is where you map out the details of your progression.

Now you have to list the actions you must take in order to improve.

Confused? Let’s look at an example.

I want you to meet Tim—he’s a Builtforhockey subscriber just like you (wait, you’re not a subscriber? Get my free hockey IQ quiz and a bunch of other goodies by signing up here!)

Over the past few months, I’ve learned quite a bit about Tim as a hockey player via email. Among other things, he let me know what he’s currently comfortable with and struggling with in regards to his on-ice performance.

If Tim really wants to improve his face-off taking ability, here’s how he’d do it with the 3-step framework for continuous progression…

After Tim’s post game evaluation, he’d have something along these lines:

Then, the 3rd step in the framework—what do I need to do in order to become my best—might look something like this in Tim’s case:

See how powerful this is?

Tim has identified what he’s already good at—winning puck battles down low. This lets him know he can focus his time elsewhere, at least for now.

Tim also identified what he’s struggling with—winning face-offs. This lets him know where the bulk of his time should be spent next time he’s out on the ice.

By turning his findings into actionable tasks on his quest to become his best, progression becomes inevitable!

As hockey players, we need to do the same thing the business consultant does for his clients—establish a road-map to go from where you are to where you want to be.

It’s time hockey players take progression and development into their own hands.

It’s time hockey players become their own consultants and map their way to success with this proven 3-step framework!

How do you gauge your on-ice performance?

Leave a comment below because I’d love to hear your thoughts on player development.

4 Comments on “How to Know if You’ve Played a Good Game: 3-Step Framework for Evaluating Your Performance in Hockey”