Scoring goals in hockey is hard.

With all the changes made to the game over the past few years, scoring goals has become extremely challenging.

Goalie equipment has increased in size across the board, taking away much of the remaining ‘open-net’ space.

Goalies themselves are bigger and still move considerably fast—the perfect example is Carey Price (whom many even consider to be the best player in the world at the moment).

Then there are other factors. Skaters are stronger, faster and more athletic than ever before—but so are their defenders.

This makes for intense battling all over the ice, and getting to the net for a good scoring chance is just a pipe-dream for all but the most skilled players.

Gone are the Gretzky, Lemieux and Hull days of having 70+ goal seasons.

Odds are that will never happen again (your beer league stats don’t count!).

Impressive numbers, no doubt. But still nowhere near the 92 goals Gretzky put up in ’81-’82.

Goal scoring has changed over recent years, that much is obvious.

But surprisingly, one thing hasn’t changed—at least not significantly.

The numbers behind scoring goals.

Let’s take a look at some examples so you can better understand what exactly goes into scoring goals. You’ll then have an idea of what to do in order to increase the rate at which you score goals.

This won’t be anything revolutionary, but it may just open your eyes to the secret behind why some players score more than others, and how you can be just like them if you follow what the numbers tell you.

The only two statistics that matter for scoring goals

When we think of a high goal scorer, we think of a player that just overflows with talent and natural ability. But what if this was just one piece of the puzzle?

What if there was an underlying truth—based on cold hard statistics—that would make up the bulk of a player’s scoring ability?

In order to judge a player’s goal scoring ability, the only two statistics we really need to look at are goals scored (G) and shots taken (SH).

With these two statistics, we can determine how effective a player is by calculating his shooting percentage (SHT%).

“Shooting percentage is a statistic that measures the rate in which a player’s shots on net result in goals. Shooting Percentage is calculated by taking the total number of goals scored and dividing it by the number of shots on goal (SHT% = goals/shots on goal).”

Basic stuff, I know—but it gets better,

With this metric in mind, let’s take a look at Gretzky’s dominant season back in ’81-’82:

That’s a lot of shots. It puts him at just under 5 shots per game on average. Furthermore, that 24.9% shooting percentage means that he would score on 1 out of every 4 shots!

That’s a player with tremendous hockey sense—you wouldn’t want to leave him open too long.

But what would a sniper by today’s standards look like?

Why was Gretzky so dominant? Is it because he was a better shooter than everyone else, being able to score on 24.9% of his shots?

Let’s take a look at more recent statistics from various players to see what’s changed over the years.

I’m going to use Steven Stamkos as an example, as he’s one of the best snipers in the game today in my opinion.

Pretty close, considering how much the game has evolved since the ’80s.

Now, what if Stamkos would have taken more shots during his ’11-’12 season? If we bump up his shot total to that of Gretzky’s (from 303 shots to 369 shots) and keep his shooting percentage the same (19.8%), he would have scored an extra 13 goals, putting him at 73 goals for the season.

That’s a significant boost, and this hypothetical example of taking just a few more shots over an entire season would have made Steven Stamkos the only player to score 70+ goals since the year 2000.

So what gave Gretzky the edge? Was it his insanely high skill level or just the era in which he played the game?

Would a Stamkos or Ovechkin of today have dominated the same way Gretzky did in his time?

Well, all we have to do is look at the numbers again…

When we look at Gretzky’s shooting percentage over his entire career, we notice something a little different:

Over his entire career, Gretzky had an average shooting percentage of 17.6%, which is significantly lower than during his record-breaking season (24.9%).

He scored a little more than once out of every 6 shots (which is still amazing, but not quite like is record-breaking season).

When we take a look at Stamkos’s shooting percentage over his career thus far, we see something similar to Gretzky:

Over his career, Stamkos also scored a little more than once out of every 6 shots. Judging by the numbers, one can say that Stamkos and Gretzky are very similar in terms of shooting ability, both scoring about 17% of the time over their careers.

Now, a case can be made that Gretzky played many more games than Stamkos (at least thus far), which would normally result in a lower average shooting percentage—players tend to produce less as they get older for obvious reasons. Only time will tell if Stamkos’s scoring ability will slow down as he ages.

But to put that argument to rest, we can look at other prolific goal scorers from Gretzky’s era and compare their overall shooting percentages during their careers:

So why then was Gretzky such a tremendous goal scorer even if there were other, presumably better shooters than him? 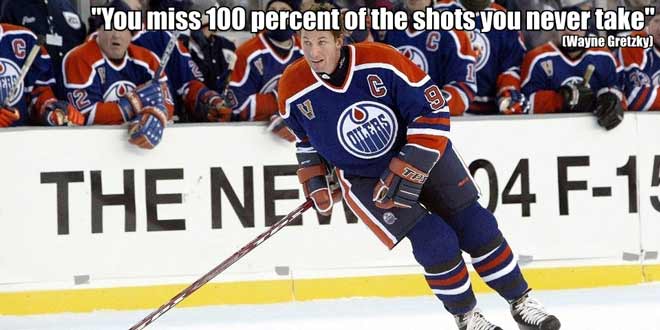 The answer is simple: While he was definitely a great shooter (heck, he had a season with 26% shooting efficiency!), he took a ton of shots!

He even coined the popular quote (as seen above), “You miss 100% of the shots you don’t take.”

He definitely lived by that statement throughout his successful career.

The key to scoring more goals in hockey

When you take a look at the numbers, you see that there’s a simple solution for scoring more goals.

Everybody says it—your coach, your teammates, your parents. But who actually does it?

We’re all culprits. We all try and make fancy plays instead of taking the easy shot.

Now you’ve seen the numbers and the proof. It pays to take shots whenever you have the chance.

Sure, the game might be tighter in today’s day and age—bigger bodies, bigger goalies, and less overall room on the ice make it harder to get quality shots off.

This is one reason why Gretzky was as good as he was—it was relatively easier to take shots back then.

But this doesn’t mean scoring is impossbile in today’s game.

Stamkos, Ovechkin, Seguin, Nash—these are all players that take a ton of shots. More than other players.

They’re among top scorers each year.

They’re good shooters, but they actually shoot every opportunity they get.

Having a great shot is just the beginning (you can improve your shot by reading Jeremy’s advice here). Getting your shot off is equally, if not more important (I’m going to cover this in a later post).

To give you an idea of the number of shots you need to take to score a goal, all we have to do is look at the top players in the NHL and take an average of their shooting percentage.

So the best scorers in the NHL, with the factors at play in today’s game, need to take 7 shots in order to score a goal.

This is for the BEST scorers.

Average and below average scorers need to take even more shots, as their shooting percentage is lower.

What does this mean for you?

If you’re playing the appropriate level of hockey for your skill level and you consider yourself an above-average shooter, you’ll still need to take roughly 7-8 shots to score a goal.

If you’re a below average shooter, this number climbs up to around 9-10 shots in order to score a goal.

This puts things into perspective for you and shows you just how hard it is to be that prolific goal scorer you’ve always wanted to be.

But there’s good news—don’t get discouraged yet.

To be that player you’ve always wanted to be, all you have to do is create shooting opportunities for yourself.

Just put the puck on net. Good things will happen.

What’s more, shooting more will make you a better shooter—it’s kind of like a self-fulfilling prophecy.

Take this hypothetical situation as an example:

It’s simple math, but it works.

Don’t try and re-invent the game. The greats have proven that shooting more is the key to becoming a great goal scorer.

Keep track of your shooting percentage

In order to improve as a goal scorer, keep track of your shots taken every game. It’s an easy stat to keep track of, and you can do it yourself or just ask your parents/friends/coach to do it for you.

You’ll be able to determine your shooting percentage along with any improvements you make throughout the season.

Just being aware of this stat and working on improving it can help you better your game tremendously.

Keeping it top of mind will force you to shoot more, improve your shot, and score more goals.

Get out there and start shooting—any chance you get!

What was your shooting percentage last game? Leave it in the comments below because I’d love to see who the snipers are!