Here’s one quick fix that could really help your game—more specifically, a tip for scoring more goals.

The inspiration for this post comes from my own personal experience as a player as well as watching some of my friends play at a lower level. Here’s how the idea came to mind.

A few years ago, I was in a scoring slump. My coach Guy Boucher at the time had pointed out an aspect of my game I wasn’t so great at and explained to me that it was the reason why I wasn’t scoring as much as I should have been. Luckily it was easy to fix, and he gave me the solution.

As soon as I implemented his advice, I saw a difference. Not only was I scoring a few more goals, but I was also getting a ton more scoring opportunities which is what I needed. It also added to my Hockey IQ.

Fast forward a few years to today, and I now realize that it wasn’t just me. I see a ton of players doing the same thing, and they’re missing out on easy goals because of it.

I told one of my friends about this quick fix to see if it would help him out in his Thursday night beer league. Turns out that after he took my advice, he had back to back games with two goals. Now I obviously can’t take all the credit, but I do feel this simple tip can help many of you score an extra few goals during your season.

By the end of this post, you should be able to implement this tip as soon as your next hockey game and start seeing results within the next few times you step out onto the ice once it becomes second nature.

Let’s take a look at this quick fix that I like to call, “downshift to the net.”

Downshift to the Net 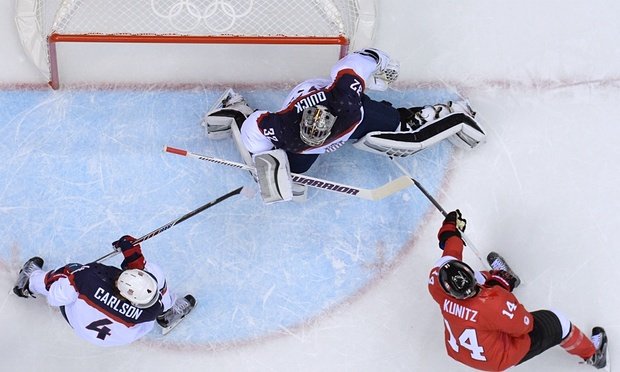 The main idea behind this concept is that many players miss out on great scoring chances because they drive the net too hard and are too tied up in the goalie or opposing defender to get a shot off or catch the rebound.

You see, all I needed was someone to point it out for me and show me on video what I was doing wrong.

I’m a very explosive skater and sometimes I would drive deep into the zone until I was almost on top of the goalie. My teammates would fire me a pass or take quick shots in order for me to get the rebounds, but I was too close—I had no room to shoot and the rebounds would bounce out behind me too quickly. That’s the problem with driving the net at full speed.

I’m sure it’s something you’ve heard before. Something along the lines of “just put your head down and drive that net.” Well I’m telling you that this isn’t your best bet. Instead, I like to use the term “downshift to the net.”

Because downshifting—like in a car—simply means you lose a bit of speed, but you’re able to accelerate even faster if need be. It’s the same thing on skates. By slowing down just a little bit when driving the net, you’re able to keep the play in front of you, take in more information from your surroundings, and put yourself in a better position to catch a pass or get a rebound.

It’s simple really—slow down just a little bit so you can see the play, and then react when you need to.

You can gauge yourself based off of the puck carrier. If you see his only option is to shoot, then you can accelerate to the net. If he still has an option to pass, then hanging back a little bit might help so you’re not on top of the goalie when the pass comes. This way, you’re still able to react and make a play with the extra second you’ve given yourself by slowing down.

One thing to note here is that you’re not slowing down tremendously to the point that your backchecker is catching up to you and taking you out of the play—it’s letting go of the gas just enough to give yourself some extra time and think of what you’re going to do before it happens.

What’s more, you’ll also be in better position to jump on rebounds, as they’ll more often than not remain in front of you instead of popping out behind you which is the case when you’re too close to the net.

So here are the key takeaways for this downshift to the net strategy:

Slow down just a stride or two in order to take in more information and prepare to react. Watch the puck carrier, the goalie, and the backchecker who’s trying to put pressure on you. Try and guess how the play is going to unfold, and adapt accordingly.

If it’s most likely going to be a far-side shot, get ready for that far-side rebound. If it looks like it’s going to be a pass or a late goal-line puck jam, look to get to that back door post to bang it in.

It really comes down to taking your foot off the gas just a touch so you can think a little bit more and react a little bit faster.

Always give yourself time and space to react. Find openings on the ice, place yourself in passing lanes, try and think about what your puck carrier is trying to do, and support him as best you can.

If you keep this simple tip in mind the next time you’re driving the net, you’ll see that making something happen—either getting open for a shot or jumping on a rebound—will be that much easier.

You’ll also increase your chances of scoring a goal. It doesn’t get any better than that.

Having problems with a certain aspect of your game that’s holding you back from getting on the score sheet? Leave a comment below. I answer all comments!