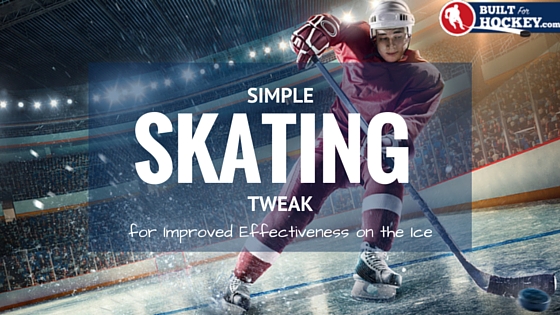 If you’ve been a fan of Built for Hockey for a while, you know that I’m a big fan of shortcuts.

Not shortcuts for the sake of doing less work, but shortcuts that are easy to implement and that lead to improved effectiveness as a hockey player or coach.

If you look trough my past articles, you’ll find tons of quick tips for improving your game…

My hand-picked exercises for skating faster.

The simple trick I like to use for maximizing scoring chances on a 2 on 1.

But one thing’s for sure—I’m a huge fan of little things that can make a big difference.

Here’s something simple you can do to improve your game as soon as the next time you’re out on the ice.

And coaches—you’ll want to get your team buying into this concept, too!

Simply put, by adopting a skate on first touch mentality, you can easily create more space for yourself on the ice.

Skating on first touch simply means taking a few quick steps towards open ice right after receiving the puck—either from a pass, a loose puck, or after winning a battle.

It’s a simple concept, but it’s extremely effective (throw in some breakaway speed and you’re in business!).

By skating on first touch towards open ice:

And it doesn’t matter which position you play—both forwards and defensemen can benefit from skating on first touch.

What’s more, this simple concept gets infinitely more powerful when an entire team buys into it…

Back in junior, we had a pretty fast team. We probably had the fastest team overall, but what made us exceptionally annoying to play against was that we were taught to skate on first touch—every time the puck came our way, we would head for open ice.

This made us extremely hard to defend, and created a ton of openings down-low  in the offensive zone for us to capitalize on—all because we adopted a skate on first touch mentality.

Let’s take a look at how you can implement the skate on first touch (S.O.F.T.) concept into your game.

How to skate on first touch in different situations

Like I said, it really doesn’t matter whether you play forward or defense—it’s something you should do regardless of your position.

In the defensive zone, it’s all about creating space in order to quickly transition from defense to offense.

For defensemen, this could mean heading up ice after a D to D pass behind the net, or simply  heading behind the net after a puck battle is won in the corner in order to give yourself more time & space to make a play.

For forwards, it’s important to skate on first touch on the breakout. By exploding up ice when you receive the puck, you essentially force your opponents to back-check rather than continuing their offensive zone pressure.

Just a few quick steps up ice after receiving the puck can make all the difference (need to improve your speed? download my free guide).

Don’t make the mistake of staying stationary—start skating up ice as soon as possible!

In the neutral zone, getting the puck either means you’ve created a turnover or you’re receiving a pass from a teammate during a rush.

In any case, nothing changes!

For defensemen, you’ll either be exploding up ice or exploding laterally in order to open up a passing lane to one of your forwards. From there, you can choose to continue carrying the puck or dish it off to the side if an attacker puts pressure on you.

For forwards, it’s all about gaining the blue line. If you receive a clear neutral zone pass on a rush situation, you might want to take open ice towards the middle or even get wider and use the lane along the boards to get into the offensive zone. Even if you have to slow down in order to catch the pass, get your feet going again on first touch.

Common sense, I know…but the better you get at skating up ice as soon as you get the puck, the more chances you’ll create for yourself and your team.

Just think to yourself, “if the puck is on my stick, my feet should be moving.”

In the offensive zone, defensemen and forwards can use S.O.F.T. in specific situations.

For defensemen, you’ll want to skate on first touch when you get the puck up at the blue line. Usually, this means you’re sliding across the ice to try and create a shooting lane for yourself or give time to your forward to support you on the boards.

You can also skate on first touch and head down the boards towards the corner if you just received the puck from your D partner and you have a defender close by squeezing you to the outside.

Again, the goal is to give yourself more room to make a play. The faster you move, the more time & space you create because it’s extremely hard to defend against.

For forwards, offensive zone S.O.F.T. is all about the cycle down-low. If you’re the type of player that waits for your teammate to cycle the puck and then just waits there with it until a line-mate gets open, STOP.

As soon as you get that rimmed puck from a teammate, you have to explode in a specific direction—either back up the wall or down low towards the back of the net.

Heck, you can take the puck right to the net if your first few steps are quick enough.

If you’re a forward, I want you to remember one thing from this article: Skating on first touch is one of the best ways to create scoring chances for yourself and teammates in the offensive zone.

It’s as simple as that. The faster you change directions, move to open space, and create confusion, the harder it’ll be for the opposing team to defend you.

That’s really all there is to it—a simple concept that can easily improve your effectiveness out on the ice.

Hockey is a game of split-seconds. If you make a conscious effort to skate on first touch, you’ll gain an extra split-second over your defenders.

That extra split-second can mean an easy zone entry, a quality shot on net, or even a goal for your stats sheet.

It really is that powerful when you make it a part of your game.

Now, some of you will put this quick tip to work and see great results…

…but many more of you will brush it off as just another old “skating” tip.

Which one are you?

Let me know in the comments below if you take action because I love to hear about players serious about improving their game!

Enter your Name & Email below to receive your copy of Breakaway Speed:

Spam sucks. I won't send you any.