In fact, my old coach used to call me a master puck retriever—no word of a lie.

It’s because I was extremely efficient when it came to winning battles in the corners and along the boards. If there was a loose puck, I was coming out with it 9 times out of 10.

If the opposing defenseman had full control of the puck but I was close enough to apply pressure, chances are I was recovering the puck, too.

Now, winning puck battles does have a lot to do with strength & speed—luckily, I started training at a young age and focused a lot of time on my physical ability (it turned out to be one of the main reasons I got drafted).

But it’s not just about being strong and explosive. While it helps, it’s not the secret to winning puck battles.

It’s something else—something that, if mastered, doesn’t require hours of gym or ice time.

It’s something technical that can significantly increase your chances of winning your battles, recovering loose pucks, or even stealing pucks from opposing defensemen.

And the best part is—any player can do it. It’s not some super complicated technique that only talented players can use.

Anyone can implement this into their game and see results as of tomorrow…no matter how big, small, slow or fast you are.

Before I teach you the technique, I first have to walk you through how most players approach puck battles.

This article is going to be short and to the point, so pay attention… 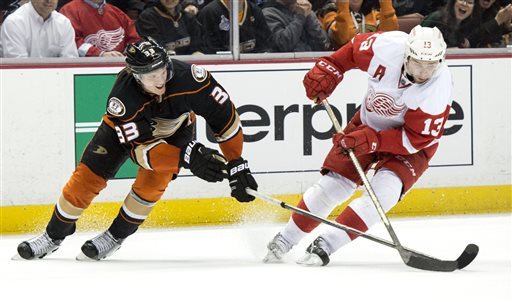 Picture yourself out on the ice just a few feet away from your opponent who’s just about to recover a loose puck.

So you skate over as quickly as possible and go right for his stick—maybe your coach taught you to lift your opponent’s stick to try and steal the puck, or even just try and poke it away from him.

‘Stick on puck‘ is what we’re taught from a young age.

While this is an effective way of winning puck battles or getting pucks back, it’s not how you get the label ‘master puck retriever‘ or win 9 out of 10 puck battles.

It takes more than just some stick-on-puck fundamentals.

How do the best puck-battling forwards in the NHL always come out with the puck?

How does David Desharnais, one of the smallest players in the league, always seem to control the puck down low better than others almost twice his size?

How does Sean Conturier—a player that I had the chance to play with and learn a lot from—make it seem like it’s impossible to get the puck off him down-low?

What about the magician, Pavel Datsyuk who makes it seem like the puck is glued to his stick blade all the time?

These players are skilled, but there’s more to winning puck battles than that…

What do these players do that makes them extremely efficient at winning battles?

And on another level, what did I do to become a puck retrieving asset to my team which allowed me to play with the better players and give them more scoring chances?

Before you jump the gun and say “I’m too small/weak to win battles” or “there’s no contact in my league,” hear me out…

Note: Are you a hockey player? Do you want to improve your hockey sense in order to become a smarter player and make better decisions with and without the puck? If so, click here to learn more about The Hockey Sense Handbook

It’s not about hitting or out-muscling your opponent (although if you can do this, it will definitely help!).

It’s more about positioning yourself in a way that your opponent can no longer get the puck.

And all you have to do in order to start winning more battles is change your mindset and tweak your technique. 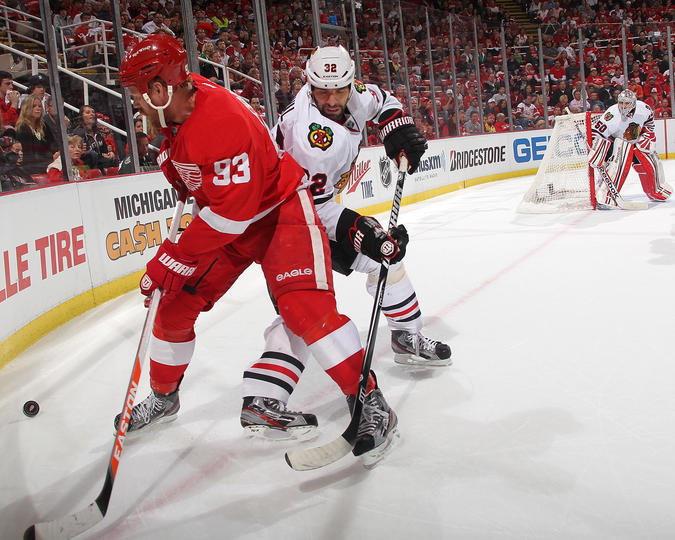 Instead of thinking ‘stick on puck’ first, think about how you can position your body between the puck and your opponent as quickly as possible.

The “stick on puck” concept should come naturally to you anyways—you’v most likely been doing it all of your hockey career. Keep doing that.

But make a conscious effort to think of placing your body between your opponent and the puck…that’s where the real success happens.

The top players in the NHL who excel at winning battles and recovering pucks know how effective this is—they eliminate their opponent by getting between them and the puck.

As soon as you gain this advantageous position, your opponent now has to go AROUND you to get the puck back.

You can simply spread your legs a little bit, “be big” so to speak, and protect your puck as you see fit—just like Franzen does in the image above.

It’s going to be extremely hard for your opponent to get the puck back from behind you unless he regains the advantageous position on you.

Once you have the puck, instead of thinking to yourself “I’ve gotta protect this puck,” instead tell yourself, “I’ve gotta keep my body between my puck and my attacker at all costs until I make a play.”

and more. These are all effective puck-battling tactics that will help.

But at the end of the day, all you want to do is keep your advantageous position. Focus on this.

Don’t worry if you can’t see your opponent.

You’ll be able to feel him pressuring you on either side when he decides to do so—just keep the puck off to the opposite side from which he decides to attack, and spread your legs a little (like Franzen does) to keep any sticks away from your puck.

This technique of using your body as an obstacle that your opponent must go around is extremely powerful.

Gaining the advantageous position for even a split second can give you all the time you need to make a nice play.

This simple ‘technique tweak‘ and mindset switch can literally change the way you play the game.

I know, because it did for me.

Back in Junior, I was on a line with Mike Hoffman of the Ottawa Senators when he was just starting to dominate. If you watch hockey, you know that Mike has one hell of a shot.

My job was evident—get to pucks first, win my battles, and find Mike in the open space.

Once I figured out that there was more to winning battles than speed & strength—gaining the advantageous position—I started mastering my play down low.

The pucks came out to Mike in the slot, and he made no mistake.

You can be a tremendous asset to any team—regardless of your size and the caliber of hockey you play—if you learn to use your body to win puck battles.

Now get out there and win your battles!