It sneaks up on you when you least expect it and can turn what seemed like a good start to the season into the worst scoreless streak of your career.

Whether you play hockey competitively or just for fun, the ‘scoring slump’ is VERY real.

If you’ve been in a scoring slump in the past or witnessed a teammate go through one, I’m sure you’re aware of the impact it can have on a hockey player’s confidence (in hockey, confidence is EVERYTHING!).

You see, players tend to think scoring slumps are a result of their poor skills—after a few games without any goals, they start to blame their abilities and start to put more pressure on themselves to perform.

“I haven’t score in 5 games…I HAVE to score tonight.”

“How the heck did I miss that open net?”

“If I had a better shot I would’ve gotten that one.”

All this does is create a never-ending spiral of negativity and inevitably makes your scoring slump worse.

Before you know it, a seemingly harmless string of games without a goal can lead to an entire season of bad performances.

Scoring slumps have nothing to do with your shot, your stick-handling or your nice moves…

and everything to do with what’s between your ears!

Here are 5 things you can focus on as soon as next game to break your annoying scoring slump and get back to scoring more goals for your team (okay fine, for your stats too).

1.Play inside the perimeter

More often than not, scoring slumps linger on due to players staying “on the outside” in the offensive zone.

Have you ever heard of the term perimeter player?

A perimeter player is a guy that stays on the outside of the dirty areas where the majority of goals are scored.

In order to score goals, you have to get to the dirty areas, both with and without the puck. Your chances of scoring from the outside—the perimeter—are slim.

To break a scoring slump, you have to get INSIDE the perimeter. Attack the net with the puck and be ready to get hit, slashed, and whacked. That’s what it takes to score goals.

If you’re not facing any opposition, it’s because you’re so far outside of the play that you’re not affecting the outcome of the game whatsoever.

The next time you’re in a scoring slump, ask yourself if you’re doing all that you can to take the puck to the dirty, hard-nosed scoring areas near the center of the offensive zone or are you just staying comfortable on the outside near the boards?

2. Create shooting opportunities at all costs

It takes a sniper like Crosby or Ovechkin roughly 7 shots to score a goal.

These guys are the best of the best. Now, an average or below average shooter might require 9-10 shots to score a goal.

If you’re playing in the right league for your skill level, that means it can take you anywhere from 7 to 10+ shots to score one goal.

That’s a lot of shots. And these are shots that HAVE to be taken if you want to break that scoring slump.

In other words, you have to shoot every time you have the chance.

That means you need to CREATE shooting opportunities for yourself (and no, staying out near the perimeter is NOT how to do this).

When you’re having trouble scoring goals, just shoot the darn thing every chance you get!

If you haven’t scored in a few games, odds are it’s because you haven’t taken the 7-10+ shots it takes to put one in.

Now that you’re aware how many shots it takes to score goals, focus on getting into the shooting area and let it rip—the rest will take care of itself.

Here’s a diagram of the high-percentage shooting areas to help you out:

That’s right. Contrary to what you may think, you have to puck-watch less and focus more on finding open space.

In a scoring slump, players put so much added pressure on themselves that they tend to focus only on the puck and nothing else around them.

Instead, they should be reading the play and getting open for a pass.

Without knowing it, you start to play like a horse with blinders on—you have nothing on your mind but the puck, and tunnel vision starts to kick in.

How can you make a play or score a goal if you have no idea what’s going on around you? 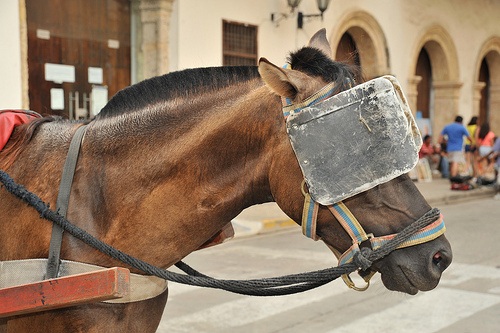 Again, you may not be puck-watching willingly—it’s the added pressure of the scoring slump that makes you change the way you play.

This can be detrimental to your chances of scoring a goal and breaking your slump, so you need to make a conscious effort to relax, stop puck-watching and focus more on reading the play.

This way, you’ll be ready when the time comes to score a goal.

4. Make scoring part of your game

In order to break your scoring slump and get back to scoring goals on a regular basis, you have to make scoring a part of your game again.

While you may not be able to add it back into your games right away, you can definitely work on scoring in practice.

To make this work, you have to approach practice with a scoring mentality.

That means every shot you take on net during practice, play the puck until it’s in the net or the goalie freezes it.

If you have to play 5 rebounds, then do it. Do what it takes to put the puck in the net, and tell yourself afterwards that you’ve just scored.

Do this over and over again, and keep telling yourself that you’re a goal scorer. 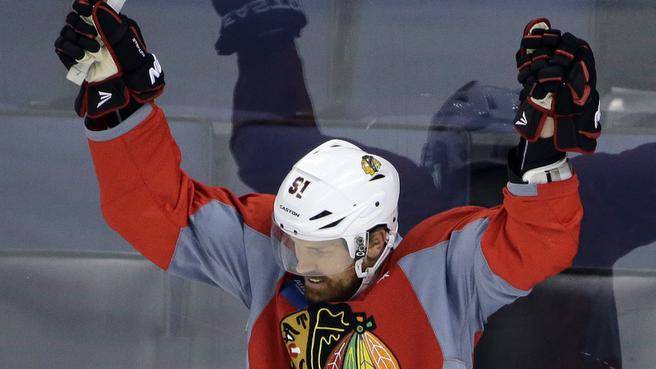 It sounds silly, but it works.

You have to turn scoring into a habit again, and scoring in practice along with positive reinforcement is the best way to do this.

Your mind doesn’t know the difference between practice and a real game—scoring is scoring, no matter how it’s done.

Get back into that habit. Train yourself to score and reinforce it with positive thoughts during practice, and you’ll learn to score again when it really counts.

When in scoring slumps, our thoughts tend to put pressure on our actions. We use negative statements like:

If I tell you, “don’t think of a white polar bear.”

What do you think of?

By telling yourself things like “I can’t miss my next shot,” you’re probably going to miss!

This is the psychological process of Ironic Process Theory at work:

“Ironic process theory or the white bear problem refers to the psychological process whereby deliberate attempts to suppress certain thoughts make them more likely to surface. An example is how when someone is actively trying not to think of a white bear they may actually be more likely to imagine one.”

By using these negatively framed statements and clouding your mind with bad thoughts, you’re essentially making them more likely to come true.

Simply re-framing a negative statement like ‘I can’t miss my next shot‘ into something more positive like ‘the next shot I get is going in‘ can make a WORLD of difference when trying to break your scoring slump.

It’s that negative mental messaging that makes your slump last longer than it should.

Take care of your thoughts, and you’ll overcome your slump much quicker.

So there you have it—5 simple tips you can implement as of your next game to help you get out of that never-ending slump.

All you have to do is:

If you keep these 5 things in mind, you’ll be well on your way to turning your scoring slump into a scoring streak and knowing how to deal with the next slump when it comes around.

There will always be slumps—it’s how well you deal with them that matters.

Know a player this article might help? I’d appreciate it if you shared it with them!